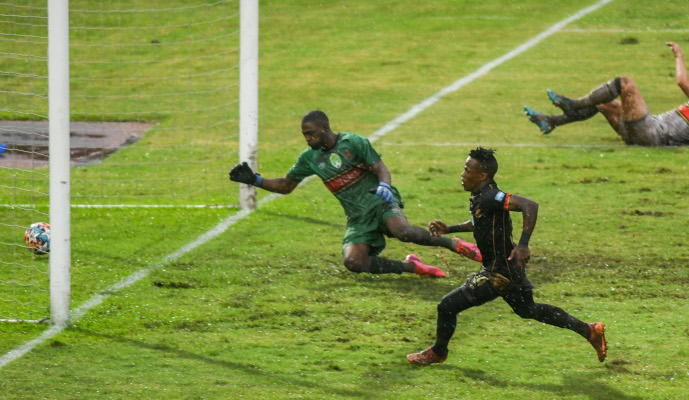 Royal AM booked their place in the Nedbank Cup semifinals after they battled back from two goals down to beat the University of Pretoria 3-2 at Chatsworth Stadium on Sunday afternoon.

John Maduka’s side seemed to be heading out of the competition when Wonderboy Makhubu scored twice in the first half to put AmaTuks in command of this quarterfinal encounter.

But a second-half brace from Victor Letsoalo gave them renewed hope before Mfundo Thikazi completed the comeback win at the death to take them into the last four for the first time.

The DStv Premiership high-flyers were looking to carry their league form over into the cup, although Tuks made the better start in Durban.

Patrick Nyame was called into action in the opening minute to save a shot from Sanele Barns after he made contact with Malesela Chokoe’s cross to the near post.

Kamogelo Pheeane was next to threaten for the visitors with a strike from range that flew just wide of the right post in the 11th minute and Royal failed to heed the warning signs as they fell behind eight minutes later.

Chokoe delivered a fine cross from the right that Makhubu steered into the bottom right corner of the net with his head to open the scoring.

Worse was to follow for the hosts when Makhubu pounced again on 27 minutes, scoring with his right foot from inside the area on this occasion to make it 2-0.

Royal finally tested Dumisani Msibi in the closing stages of the first half, with Mxolisi Macuphu seeing his strike from inside the area on the left saved on 40 minutes before Letsoalo’s header was kept out at close range moments later.

The KZN outfit needed a big effort in the second half and they were presented with a golden opportunity to get back into the contest when Msibi brought down Letsoalo inside the box as he went through on goal in the 57th minute.

The winger took the penalty himself and slotted the ball into the bottom left corner of the net to halve the deficit.

Kabelo Mahlasela then drew a save out of Msibi with a strike from distance in the 61nd minute, while Nyame had to be alert to deny Samuel Julies from restoring AmaTuks’ two-goal lead with a long-range shot on 72 minutes.

After Lulama Maqoko went close with a header that flashed just wide of Nyame’s right post from a 77th-minute corner, Letsoalo struck again two minutes later to level the cup-tie, beating Msibi with a shot from inside the area.

Nyame kept his team in it late on when he saved Thabang Sibanyoni’s header and it proved pivotal as Thikazi converted Sedwyn George’s low cross at close range in the fourth minute of added time to dump Tuks out of the Nedbank Cup in dramatic fashion.

UMKHOKHA IS COMING TO SHOWMAX