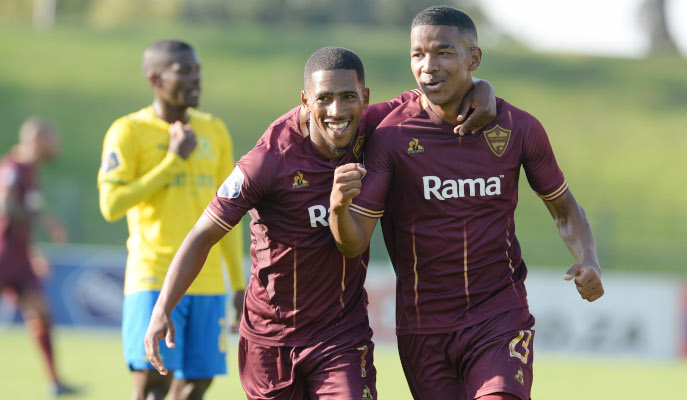 Stellenbosch FC embarrassed Mamelodi Sundowns as they claimed a surprise 3-0 win in the DStv Premiership match at the Absa Tuks Stadium on Saturday afternoon.

Despite recording their first-ever win over the Tshwane giants, Stellies remained fifth on the league standings, but they are now two points behind third-placed Royal AM, who have a game in hand. Stellies are scheduled to face Cape Town City on May 21 in their game of the season.

On the other hand, Masandawana, who have already clinched this season’s league title, suffered their first home defeat in this competition since April 2021 and they will now wrap up their successful campaign with an encounter against Royal AM on May 21.

Stellenbosch got off to the perfect start as they broke the deadlock just six minutes into the game through Ashley Du Preez. The quick striker scored with a low shot to hand the visitors a 1-0 lead after being sent through on goal by Mogamad De Goede’s long ball from the back.

Masandawana were then able to put pressure on the Stellies defence as they looked to level matters and they should have equalised through Neo Maema. The left-footed player beat his marker inside the visitors’ box, but he was superbly denied by goalkeeper Sage Stephens.

The visitors took a 2-0 lead three minutes before halftime after a mistake by keeper Ricardo Goss whose poor clearance found Dean Van Rooyen who then quickly set up Jayden Adams. The 21-year-old made no mistake as he beat Goss to double Stellenbosch’s lead heading into the halftime break.

Sundowns continued to push for their first goal of the match after the restart, but they were leaving spaces behind their defence and they were punished by Du Preez again. The 24-year-old ran onto Ibraheem Jabaar’s through pass before scoring from close range to make it 3-0 to Stellenbosch in the 57th minute.

The Masandawana technical team reacted by making changes as they introduced Lyle Lakay, Pavol Safranko, Gaston Sirino as well as Haashim Domingo at the same time. With the Stellies defence looking solid and compact, Khuliso Mudau decided to try his luck from range and his attempt flew just over the crossbar.

The hosts were hoping to grab a late consolation goal, but Sirino’s effort was well-saved by Stephens in the closing stages of the match and ultimately, Stellenbosch secured a 3-0 win on the day. The Western Cape side collected four points from Sundowns this term as the two teams drew 1-1 in the first round clash last December.

SOURCED FROM THE PSL.