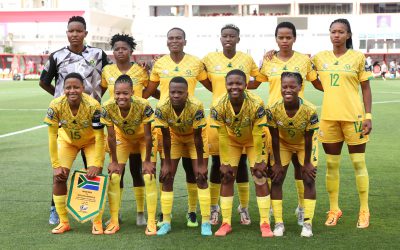 It was dubbed “The Final Before the Final” and a determined Banyana Banyana shrugged off the pre-match scrutiny to comfortably beat the Super Falcons of Nigeria in the two sides’ opening match of the Women’s Africa Cup of Nations (WAFCON) on Monday night.

This Group C match was expected to be a very tight contest between two long-time adversaries but in the end, coach Desiree Ellis’ charges showed tournament defending champions Nigeria flames to comfortably win the encounter 2-1.

After a tightly contested first half, Jermaine Seoposenwe signaled the senior women’s national team’s intent when she scored the opening goal of the match in the 60th minute. Banyana Banyana had been asking serious questions of the Nigerians and they were duly rewarded when Seoposenwe broke the deadlock to beat goalkeeper Tochukwu Oluehi with a well-taken shot.

Ellis’ charges were not done and returned two minutes later when Hildah Magaia doubled the lead to give Banyana Banyana a comfortable 2-0 lead. But the Super Falcons fought hard to pull a goal back to score through Vivian Ikechukwu in injury time.

It was a superstar performance from an incredible South African team and there were several heroines who put up their hands in emphatic fashion during this intriguing opening tournament encounter. Linda Motlhalo won the Woman of the match award to cap a superb performance.

Banyana Banyana play their next Group C match in the tournament against Burundi on 7 July 2022.