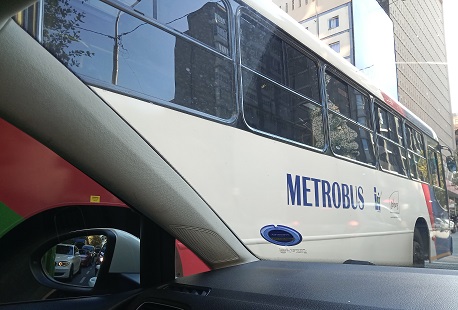 Out with the old and in with the revamped Metrobus, which is taking the streets one by one following the allocation of R48 million to refurbish some of its buses.

Member of the Mayoral Committee (MMC) for Transport Cllr Funzela Ngobeni has been inundated with complaints from commuters about the state of Metrobus, particularly the quality of the service it offers.

“This is influenced by the frequent breakdown of buses, which affects the reliability and frequency of Metrobus’ service, the quality of passengers’ experience and the revenue the company generates to sustain itself,” he explains.

According to the Transport’s Deputy Director Communications and Stakeholder Management, Olebogeng Molatlhwa, the aim of the bus refurbishment programme is ultimately to extend the useful life of the buses by at least five years. The programme started in July 2019 and will be completed by the end of July 2022.

“At the time of the programmes completion, we hope that the City will have reliable, safe and renewed buses that will serve commuters, while the re-fleeting plan is being put in place,” adds Molatlhwa.

The Metrobus’ refurbishment programme has set itself a target of refurbishing 100 buses, including performing engine overhauls and significant body repair work. Some 79 buses have been refurbished so far with the outstanding 21 set to be completed by the end of June 2022. The entity is expected to complete the recruitment of mechanics to undertake routine maintenance and repairs.

“Once refurbished, these vehicles will add to the almost 300 buses currently operational and ferrying residents to various destinations,” notes Xoliswa Mhlongo, the Managing Director for Metrobus.

In addition to the physical state of the buses, MMC Ngobeni has raised his concern on the buses often exceeding the number of allowed passengers. He had firsthand experience through his previous blitz operation with executives from Metrobus.

“I boarded several buses from Turffontein, Rosettenville and South Hills where I witnessed buses exceeding capacity even before reaching the halfway mark of their journey to either Ghandi Square or further, especially during peak hours between 6.30am and 8am,” states MMC Ngobeni.

“The excessive number of passengers on some routes, as I witnessed is particularly in the Southern region. This proves that despite the challenges faced by the company, there exists significant demand for Metrobus to tap into and become a self-sustaining entity that will turn a profit allowing it to continue providing affordable and reliable public transport.”
Apart from the refurbishment programme, the entity will also introduce an Automated Fare Collection system that will allow Metrobus to actually receive and protect all revenue due to it.

“While that system will be introduced in 2023, Metrobus MD Xoliswa Mhlongo has given me the undertaking that the entity’s management will consider interim measures to receive and protect the company’s revenue in the meantime, including entering into a lease agreement for new ticketing machines in our buses,” says MMC Ngobeni.