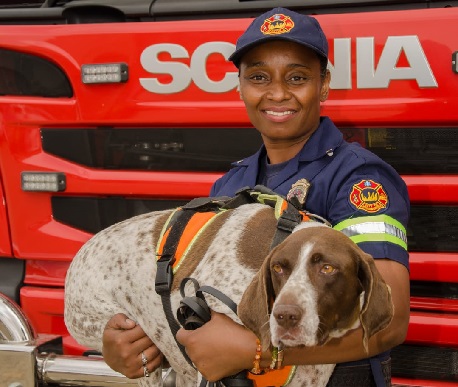 The course was attended by an elite team of public safety professionals from across Gauteng, including Tony Stacey (crew commander), Chris Morris (advanced life support: Gauteng Provincial Government), and Morné Mommsen (Midvaal Emergency Services) as well as Mervyn van Ginkel (Tshwane Emergency Services). Martin was the only female enrolled for the advanced training course among the leading team of EMS technicians.

Focused on handling rescue dogs, the intensive course was presented by Genesis K9 Group, a canine facility offering K9 Handler training, as well as the leasing and sale of trained apprehension, detection, tracking, and patrol dogs.

She says course attendees are grateful to the Department of Cooperative Governance and Traditional Affairs (CoGTA), the Provincial Disaster Management Centre (PDMC), the Genesis K9 Group, and to retired K9 instructor and former Police Captain, Paul Rheeder who specialises in search and rescue dogs, for their input in the training programme.

Martin went for a dog handler course for the first time in 2009, which entailed training K9s in wilderness search and rescue as well as disaster site search. The JMPD provided her with a dog named Hope for that course, which was a cross breed between a Belgian and a German shepherd. The two became inseparable. “Dogs have a better sense of smell and I love the fact that they can find missing people much faster. I love helping people,” she says.

Asked why she chose to become a firefighter and dog handler, Martin answers with a smile: “I love animals and being in the fire department as well as the rescue team, saving people’s lives.”

The well-travelled Martin hails from Barberton, Mpumalanga. She completed a first-aid course while in grade 8 and grew up watching Rescue 911. “Whenever there’s an emergency, I take over. Each call is unique, so you must think outside the box. I love a challenge. I’ve always known I love medicine,” she explains.

Martin’s parents exposed her and her siblings to adventure and diverse communities from an early age. “We weren’t a rich family, but our parents taught us to appreciate the small things. On Sundays, our house was always open to everyone who wanted to have a meal with us.”

Martin describes herself as adventurous, a person always up for a challenge and not afraid to go the extra mile and put in the required work.

Because of her compassionate character, Martin notes that a career in emergency management was inevitable. She started in the ambulance services sector after completing a basic training course in the year 2000. She then pursued a firefighter course at Brixton College in 2006, and the following year she started volunteering at the Berea Fire Station. By August 2007, she was permanently employed at Rosebank Fire Station.

Martin is one of the few female members of the South African Urban Search and Rescue (USAR) Technician team, classified by the International Search and Rescue Advisory Group (INSARAG) in 2017 as a medium-sized rescue team. In 2021, a need to increase the search capability of the USAR SA team from a medium to a heavy response crew was identified, and the missing component to be reclassified was the incorporation of K9 Technicians into the squad. That’s how she became involved.

“We want to get accredited in 2024 as a heavy rescue team with the UN. We’re already qualified as a medium-sized rescue team, but a heavy-duty rescue team requires dogs to search for living patients,” she explains.

As one of a few women in a male-dominated field, Martin would love to see more females working as firefighters and dog handlers. “I’d love more women to join us, and I’m willing to assist whoever needs help. We have a lot to offer. We can do anything we want to achieve as women. It’s not always the easiest being a female because you constantly have to prove yourself. We can do anything if we put our hearts to it,” she believes.

Despite her busy schedule as a firefighter and dog handler, Martin finds time for charity work. She was part of Team Zodwa that hiked Mount Kilimanjaro in 2009 to raise awareness for abused women and children. She runs a cadet programme for youngsters in Florida on the West Rand, exposing them to various careers, team building, first aid training, and firefighting.

“I want to empower as many people as possible.”

Martin won’t rest on her laurels. Her future aspirations include studying swift water rescue and becoming a diver, as well as learning more about the psychology of canines.