23 December 2018 – President of SAFA Johannesburg, Phil Mogodi has hailed the ever-popular Festive Season football tournaments, which are becoming a hit around the country and mostly the Gauteng areas.

And not far from Pimville, is another popular tournament, the KwaMahlobo Festive Games, currently under way in Meadowlands Zone 10, Soweto and are sponsored by LaLiga. KwaMahlobo has 40 men and four women’s teams.

These annual games draw thousands and thousands of spectators annually. 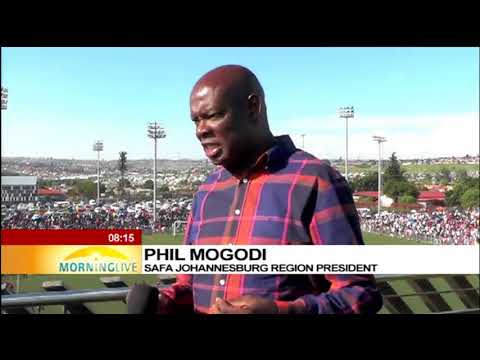 Both the Discovery Challenge and KwaMahlobo Festive Games have become a huge attraction for Festive Season revelers.

The two tournaments fall under Mogodi’s domain in Soweto, and he says he is proud of the two trend-setting competitions.

“There are several games which take place during the festive season but I am proud to say the Discovery Challenge and KwaMahlobo Festive Games are the most popular of them all by far. Thousands and thousands of people flock to these games during this period and both tournaments are growing from strength to strength with each passing year,” said Mogodi.

He paid tribute to the Soweto community for supporting the two events among many others in and around Gauteng and the country, saying such tournaments help keep the youth away from the streets and crime.

“I also want to take this opportunity to thank Discovery and LaLiga for joining hands with the community and drive these games. As a result, there are opportunities created within the communities, and in the past few years we have also seen crime scaling down as a result of the youth being kept busy by the football extravaganza. On top of them giving the youth opportunities to showcase their football talent, there are also employment openings created by these games,” he added.

The finals of the Discovery Walter Sisulu Soccer Challenge are on Saturday, 29 December 2018, while the KwaMahlobo Festive Games will come to an end the following weekend – Saturday, 5 January 2019.