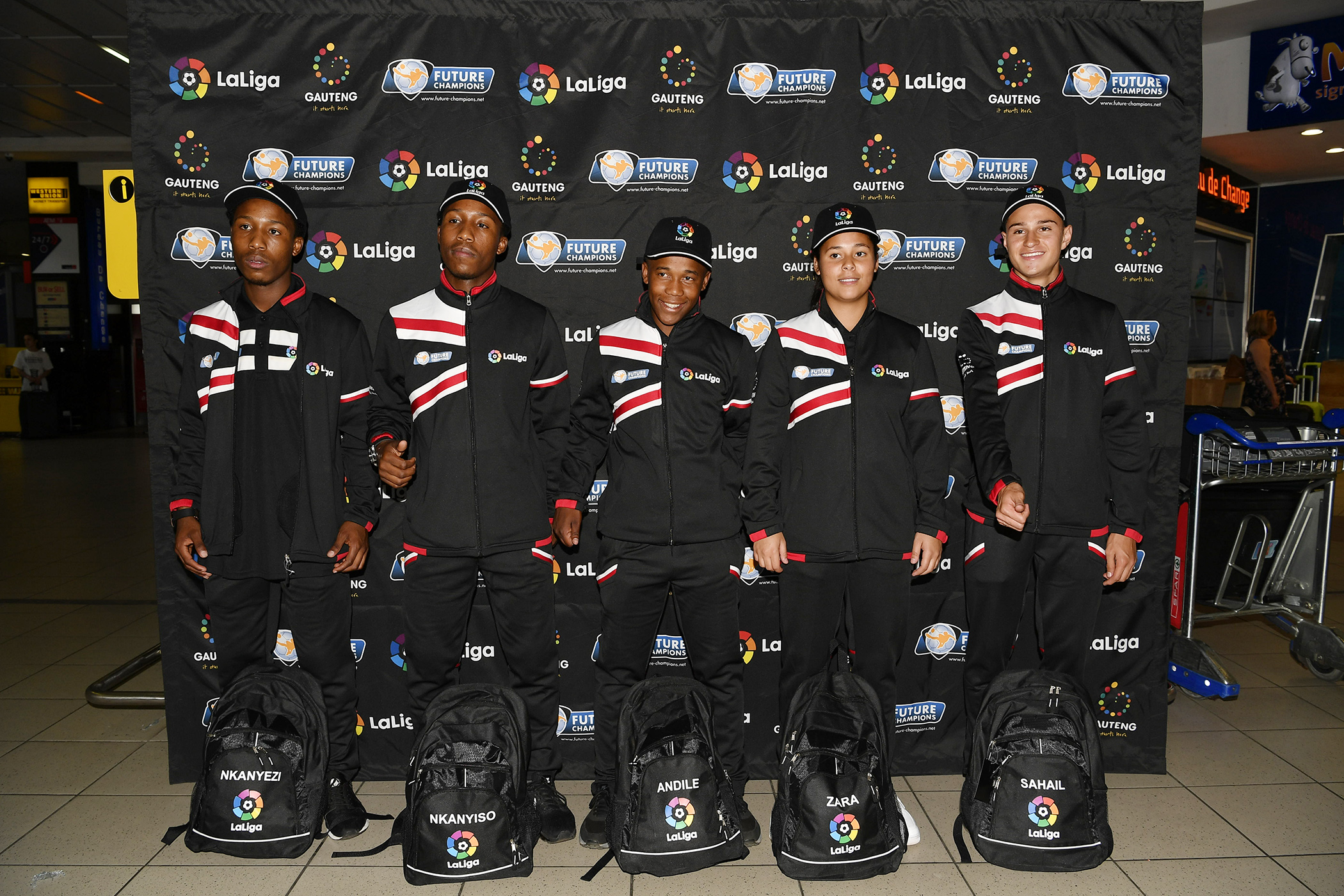 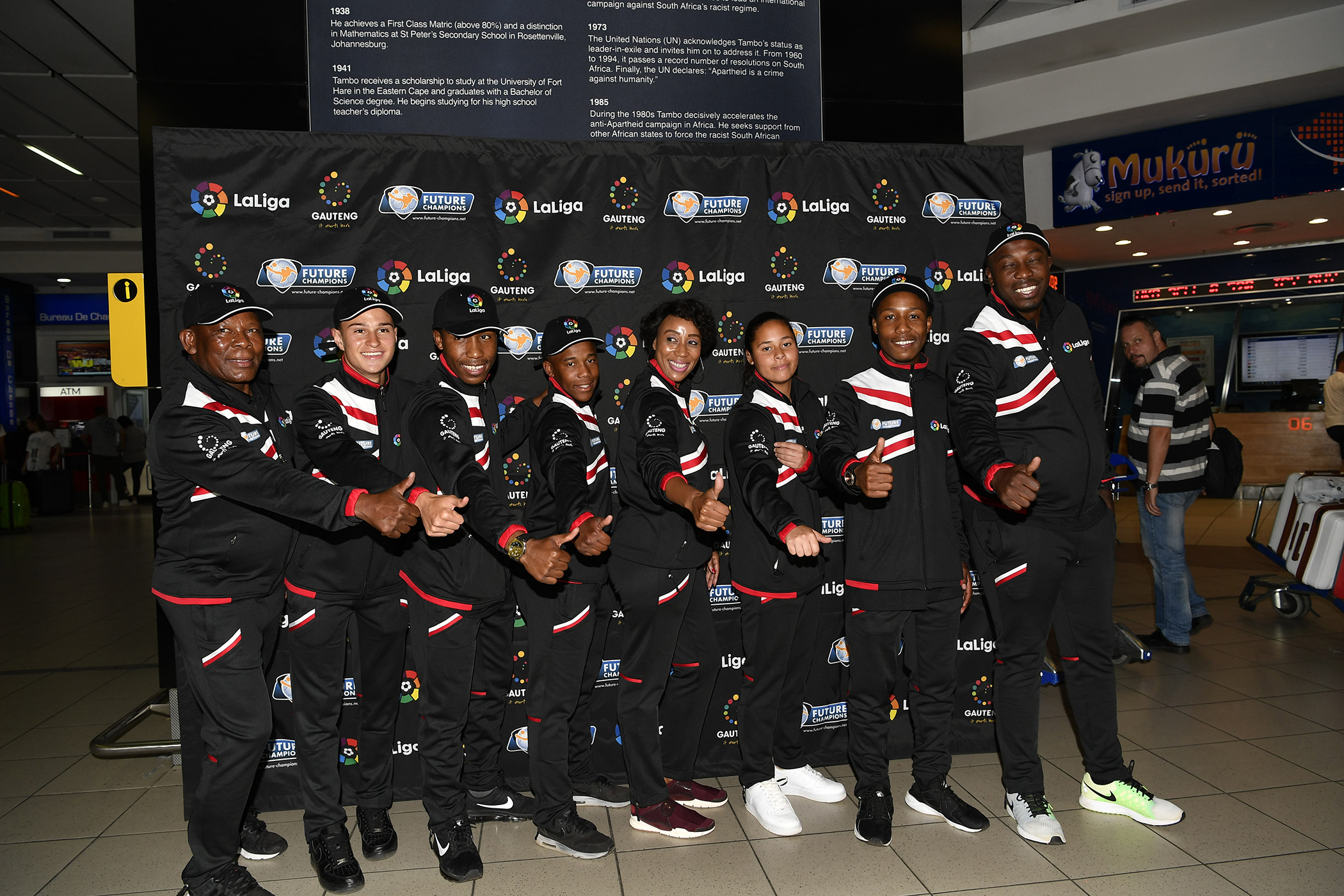 Freshly, Future Talent Search Winners were recently given a grand send off at the OR Tambo Airport.on the their trip of a lifetime to Spain.

The trip was made successful through a partnership between LaLiga, the Gauteng Provincial Government and Global Sports International.

It was further revealed that the trip is part of the partnership deal with Future Champions, Gauteng Provincial Government as well as LaLiga Santander – one of the world’s top professional football leagues.

This partnership sends most promising young South African footballers, plus a Future Coach on the trip of a lifetime to Spain annually.

The group is expected  to return Johannesburg on 7th October 2018.

According to organizers this year will mark LaLiga’s 3rd year of partnership with the prestigious Future Champions Gauteng Project. The project celebrates its 10th year anniversary in 2018.

During the announcement at the Nike Centre in Pimville, Soweto. It was revealed that this year, instead of the usual lucky three, four exceptional players who were identified through the Future Players Talent Search have been invited to join LaLiga in Barcelona.

This unique opportunity will see them soaking up exciting new cultures and, of course, being immersed in the very best that European football has to offer. 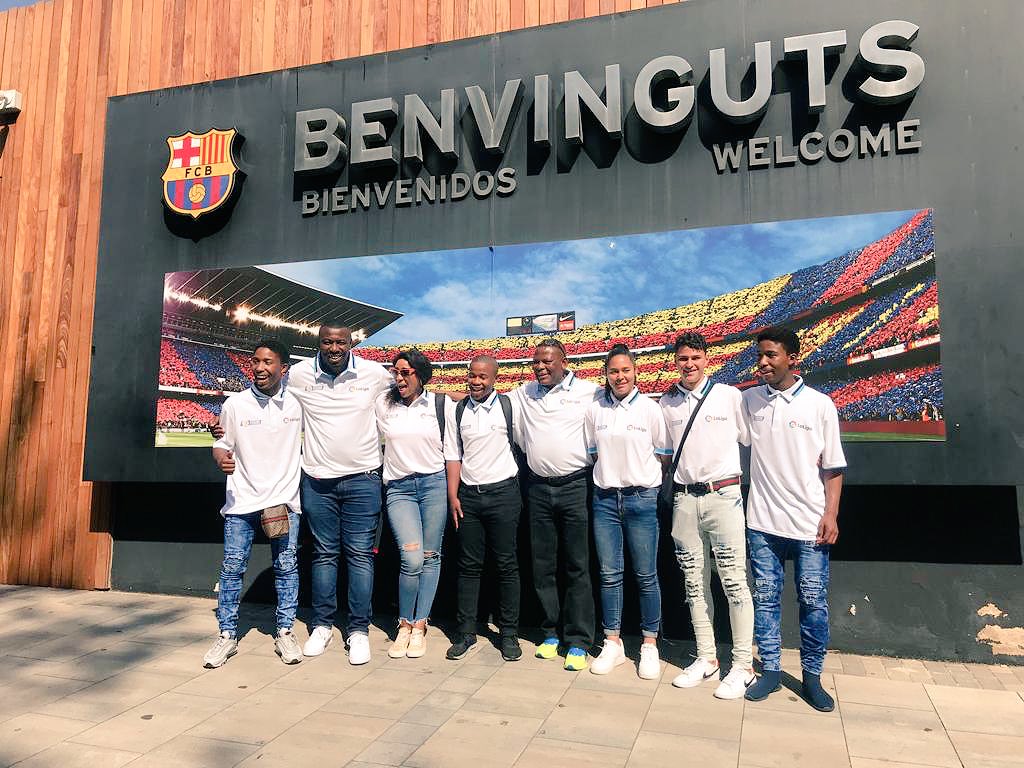 Antonio Barradas, Africa Director for LaLiga, told the audience that this group is going to have an experience of a lifetime, adding that his organization was fully committed to this project.

“It is very important for footballers and sports people to learn to respect, share and look at the future.

“One of our selections for the tour, Nkanyiso Maphosa, is a twin. Upon close review of the scores, it appeared that his brother also performed remarkably well, coming in at a very close fourth place. Under these unique circumstances, we knew it was the right thing to do to extend the invitation to his brother, Khanyezi, as well. Football is central to the Spanish way of life, with LaLiga forming an important part of this culture. The winners will get the chance to train with LaLiga clubs and it’s our hope that this helps them in both their personal and career development.

“Part of the reason that we as LaLiga continue to be part of Future Champions is because of our ongoing commitment to help develop football from a grassroots level. It’s been a pleasure to once again be involved in this initiative and we wish the winners all the best during their travels”. He said.

Cedric Ranchor, Director of School sports in the Province, argued that this project has grown in leaps and bounds.

“The tournament has become a stepping stone for most youth. Soccer teaches you skills and changes your life.”

Gauteng Sports and Recreation was represented by Phillasandwe Muvevi,  told this reporter on the sideline that his department wants to reach to every youngster irrespective of their gender.

“Every year we are delighted with the quality of the players that we see in the Future Players Talent Search and it becomes harder and harder to pick the winners,” Muvevi argued.

“We want to wish the four players and Future Coach the best of luck and hope they not only find great joy in the experience, but also take on board all that they will learn in Spain. We are as ever also thankful to LaLiga for their continued support as a valuable partner to our event,” She said.

khanyezi Maphosa, told this publication that this was a dream come true.

“I use to tell my parents that one day I will visit Spain, but I never thought it will happen so early.”

Coach Andile Zulu said he was on cloud nine.

“The exciting part is that I will come back with valuable information that will help me develop players in my community.”

Safa Soweto Boss, Phil Mogodi said his organization was working tirelessly to take players to the next level.

“Future Champions is just all about that.”