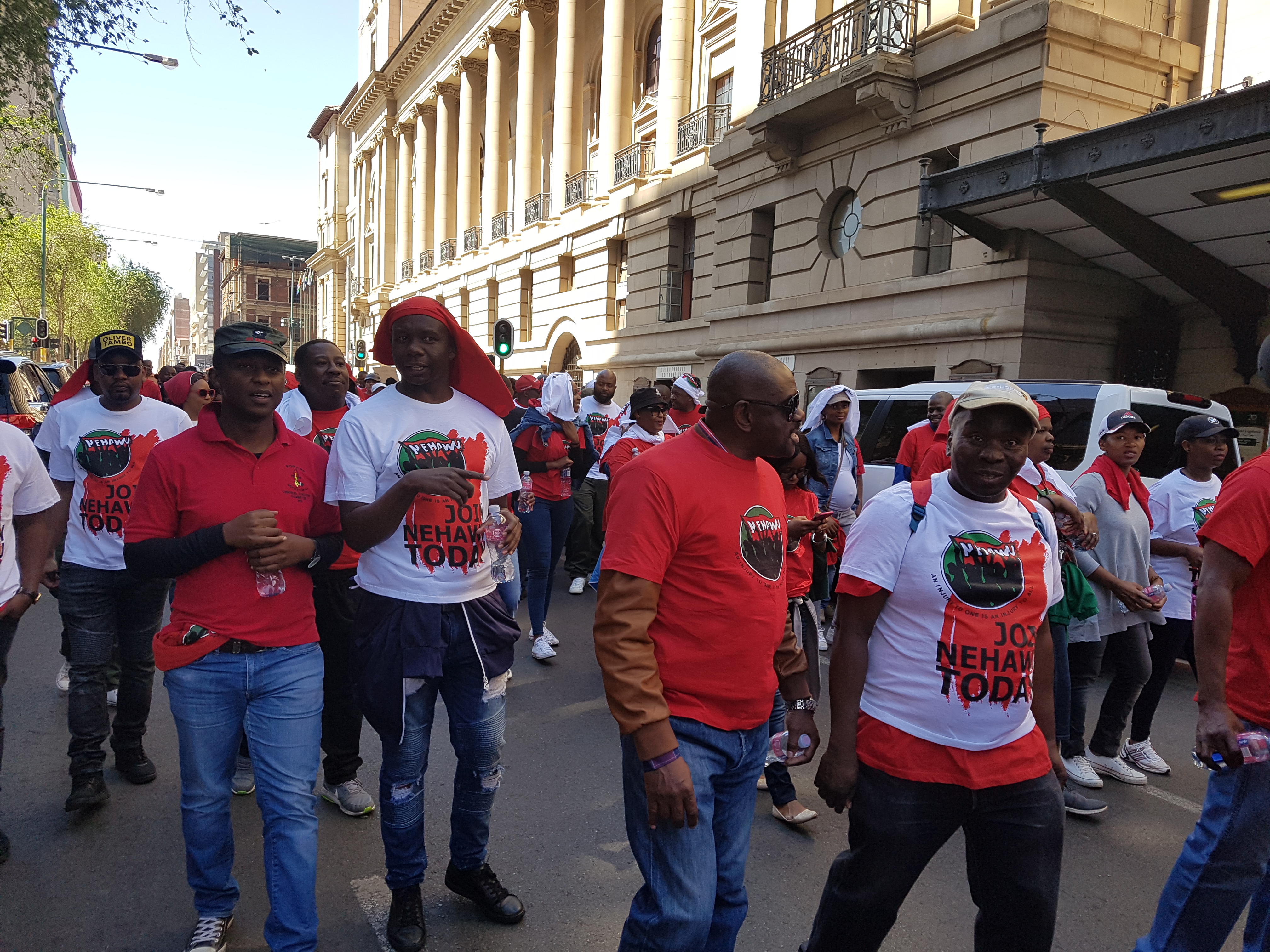 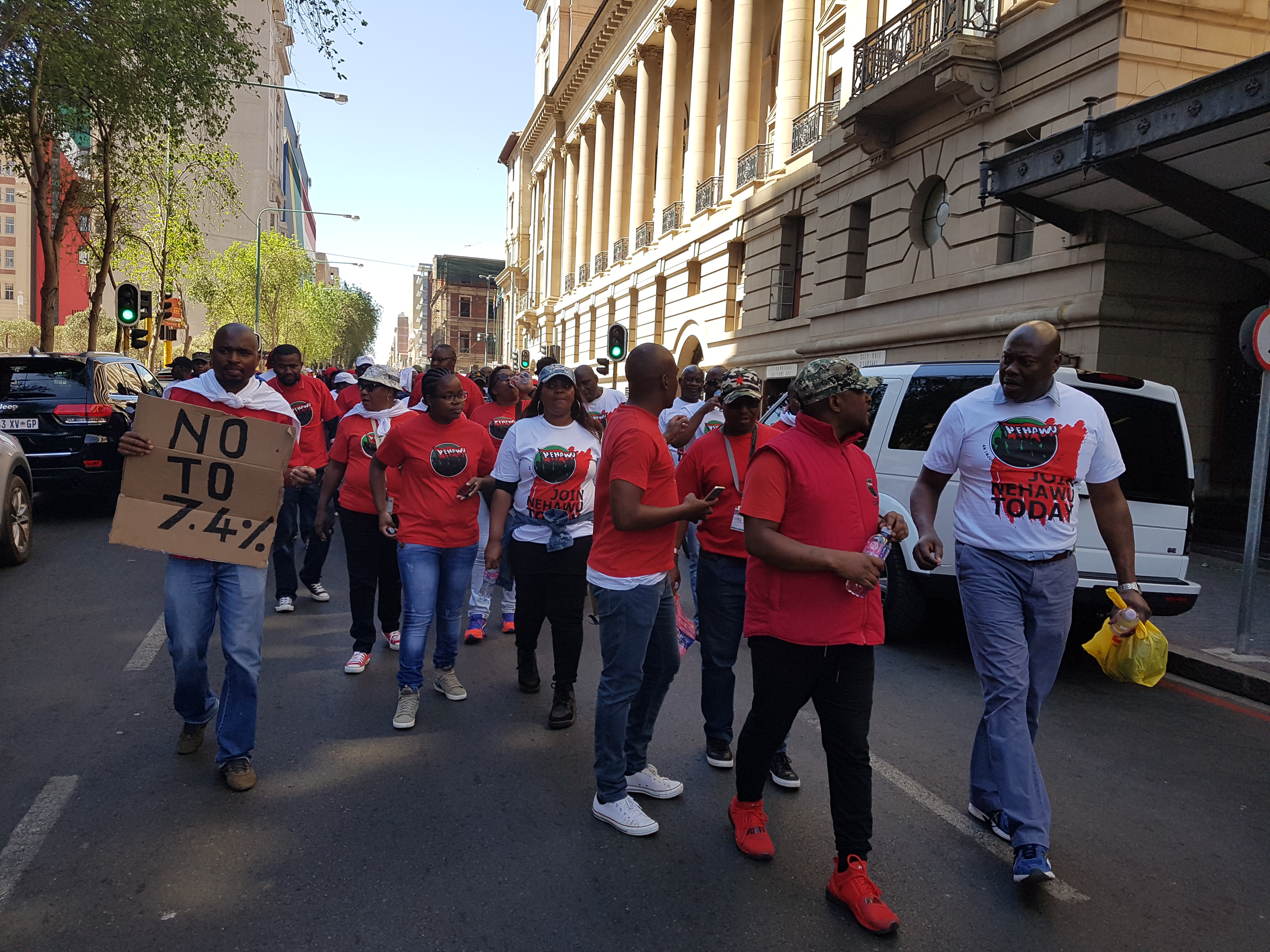 Tholukuthi hey Asijiki 9% finish and klaar!  No to 7.4%! Away with inward looking management! Stop flying business class! Down with Skosana! Current offer is Kak! These were some of the impeccable chronicled profanities hurled at the ‘intransigent’ Gauteng Provincial Legislature (GPL) management.

Back to the story,dozens of GPL employees affiliated to National Health Education & Allied Workers Union (Nehawu ) downed tools and picketed peacefully carrying placards outside their parliament in the Joburg CBD last Friday.

Clad in red and white union t-shirts, they braved the unrelenting scorching heat of the spring day and sang struggle songs, ridiculed managementat  at the Legislature Piazza.

This protest was sparked by what they branded ‘breakdown of negotiations between management and Nehawu GPL branch on  a wide range of issues including salary augmentation’.

These cheesed off employees vigorously rounded their building block twice chanting and dancing in that blazing heat. But the after effect of that less than a kilometer walk took its toll on some of them.

From a distance one could visibly see that their bellies couldn’t carry them longer. Any bystander could mistakenly conclude that they were running a five km marathon because some of them looked drunk with fatigue and in a sluggish drained state that could only be cured by a quench of an icy Mofaya energy drink.

Speaking to this publication on the sidelines, DumisaniMntungwa, chairperson of the Nehawu branch said, the strike could have been averted if management was thinking straight and prepared to listen.

He said management’s offer of 7.4% increase was inconsiderate and laughable.

“Other legislatures around the country got between 8 and 9.4%. It’s a bit unfair because we negotiated under one bargaining unit,” he said.

Mntungwa also revealed that allegations of sex for work, nepotism and reports that interns were given adequate  salary increase better than the one offered to permanent staff was some of the reasons that triggered the strike.

The picketing diffused only after management came out to receive the memorandum of their demands.

Accepting the memorandum, Uhuru Moiloa,GPL Deputy Speaker, put on a brave face and told them management was accepting these grievances with open hands and mind.

“We are still committed, there is no way we can close the doors for you. It’s so unfortunate that this issue is now in the public arena.”

Moiloa also noted that these demands are original and thanked the employees for their meticulous behaviour.

“Economic conditions are so harsh and we don’t want you to lose a cent. We must find each other because the strike has direct consequences for both of us.

“We still believe there is still a platform to find each other. Our doors are still open to find an amicable solution. We represent an institution elected by yourself and other South Africans. We are not adversaries we love you,” he said.

Peter Skosana, GPL Secretary also spoke to this reporter on the sidelines.

Pressed about sex for work, nepotism reports and arrogance?

He said, “ Those who have information must come forward and submit that evidence. As things stand we are not able to respond to those allegations.

“We are looking at all options to see how we can find each other and reach an amicable solution that can solve this   impasse that brought us to deadlock,” he said.

“We are not arrogant as a collective. We are very respectful and have our own integrity.”

Vodacom’s annual GBV March petitions men to stand up, call out, and address the violent and aggressive behaviour many women face every day

Foreign Nationals wanted out of Soweto