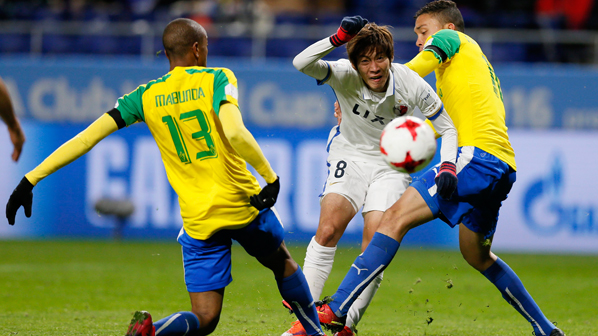 Entering the lions’ den, Masandawana set off to begin their historic run with a packed stadium filled with sounds of cheers and encouragement as the match kicked off to an exhilarating atmosphere.

The first 15 minutes were used to suss each other out while the African Champions held possession with a solid number of goal attempts to break the deadlock, however Antlers kept their cool with a dense defence line.

A foul on Leonardo Castro mid-park created an opportunity for ‘Downs as skipper Hlompho Kekana stepped up to the plate but saw the chance unanswered as the ball bounced into Hitoshi Sogahata’s hands.

In the 29th minute, Percy Tau managed a one-on-one situation after receiving a beautiful long-ball but Sogahata made a fantastic save, frustrating The Brazilians. Two minutes later, Tebogo Langerman made a fantastic run to cross perfectly into the box but both Keegan Dolly and Khama Billiat failed to connect, adding onto the misery.

Sundowns continued to trouble the Japanese defence before the halftime break but no result came of it as the men headed into the tunnel.

As the second half began, Antlers started reclaiming their possession with two goal chances within five minutes but failed to convert, despite a well-structured strike from Yasushi Endo that scraped the top of the net.

Antlers continued to show their dominant side with various well-timed passes but a structured Sundowns remained cool, clearing the lines with each try. Kashima finally broke through as Endo fired a shot that slipped through the hands of Dennis Onyango, to make the score 1-0 in the 63rd minute.

Following a number of substitutions from both sides, the pace of the game started to stabilize with the Tshwane Giants regaining their posture after a strong first half. Kashima remained strong, parking the bus but not before securing their second goal of the day when Mu Kanazaki was left unmarked in the box to slot the ball into the right corner, making it 2-0.

Attempts to reduce the deficit were left void as Antlers sunk Sundowns, leaving the South Africans to compete for a fifth place finish in the prestigious tournament.

Sundowns will now face Korean side Jeonbuk Hyundai in a 5th-6th place playoff on December 14th.

This article was sourced from the Mamelodi Sundowns website.