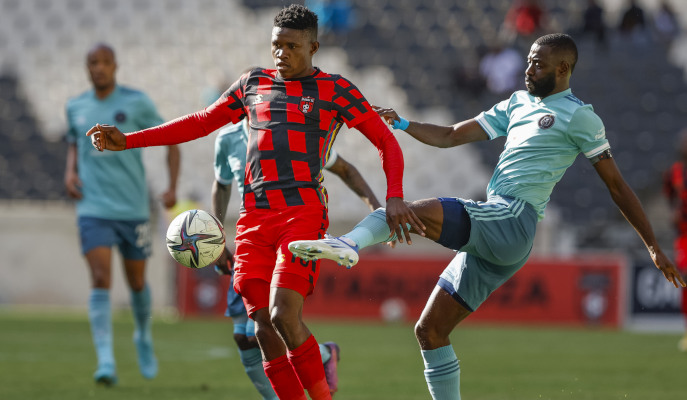 The result, secured by a first-half goal from Lifa Hlongwane, pushes the Rockets up two places to 13th on the log on 26 points and extends their unbeaten run to four games.

Maritzburg United (24 points) and Swallows FC (23 points) dropped down a spot each to 14th and 15th (the relegation playoff berth) respectively, but could reclaim their positions with wins later this week.https://platform.twitter.com/embed/Tweet.html?dnt=false&embedId=twitter-widget-0&features=eyJ0ZndfZXhwZXJpbWVudHNfY29va2llX2V4cGlyYXRpb24iOnsiYnVja2V0IjoxMjA5NjAwLCJ2ZXJzaW9uIjpudWxsfSwidGZ3X3NwYWNlX2NhcmQiOnsiYnVja2V0Ijoib2ZmIiwidmVyc2lvbiI6bnVsbH19&frame=false&hideCard=false&hideThread=false&id=1521141318537433089&lang=en&origin=https%3A%2F%2Fwww.psl.co.za%2Fnews%2Farticle%2F5250154-galaxy-beat-bucs-to-move-clear-of-rel&sessionId=5e3da27c80861e630aee996c86de229cbf3e5aea&theme=light&widgetsVersion=c8fe9736dd6fb%3A1649830956492&width=550px

As for the Buccaneers, they have gone three league games without a win and find themselves fourth and four points off Cape Town City in third – having now played a game more than the teams around them also challenging for African club competition qualification.

Pirates started brightly and Thembinkosi Lorch almost scored a stunning long-range goal when he saw Galaxy goalkeeper Melusi Buthelezi off his line, but his effort drifted just wide of the target on six minutes.

The Buccaneers then blew a great chance to take the lead in the ninth minute when a cross from a short corner kick pinballed in a busy penalty area before falling to Terrence Dzvukamanja, but the Zimbabwean stabbed the ball over the top from close range.

Galaxy offered little in attack through the opening half hour, but they then claimed the lead in the 33rd minute thanks to a brilliant set-up from Lindokuhle Mbatha, who burst past a challenge down the right of the penalty area, drew the goalkeeper and a defender to him, before cutting back for Lifa Hlongwane to have an easy finish into an empty net for 1-0.

Pirates looked for a response in what remained of the first half, but an energised Rockets outfit held them at bay and even threatened a second, but ultimately settled for a one-goal advantage at the interval.

The visitors made a double change at the start of the second half, introducing Fortune Makaringe and Kwame Peprah to add some oomph to their midfield and attack respectively, yet Galaxy had a clear chance through Orebotse Mongae within a minute of the restart, only for the attacker to be denied by goalkeeper Richard Ofori.

Lorch was a lively presence for Pirates in the second half, narrowly missing out on turning home a cross-shot from Peprah on 58 minutes, while on 65 minutes he drove a half-volley through a crowded penalty area and just wide of the target.

Peprah looked set to level the game on 84 minutes when gifted a sight of goal, but he dragged his shot wide and also saw it blocked by a defender, as the hosts became increasingly desperate in their rearguard action.

Yet the Rockets held out to claim just a sixth win of the season and boost their hopes of outright survival in the top flight.

Galaxy will be back in DStv Premiership action on Saturday, 7 May when they face Cape Town City away, while Pirates’ scheduled clash at Royal AM has been postponed due to the Soweto club’s CAF Confederation Cup semifinal, first-leg match away to Al Ahli Tripoli in Libya on Sunday, 8 May.

PIRATES MAKE IT SIX LEAGUE WINS IN A ROW