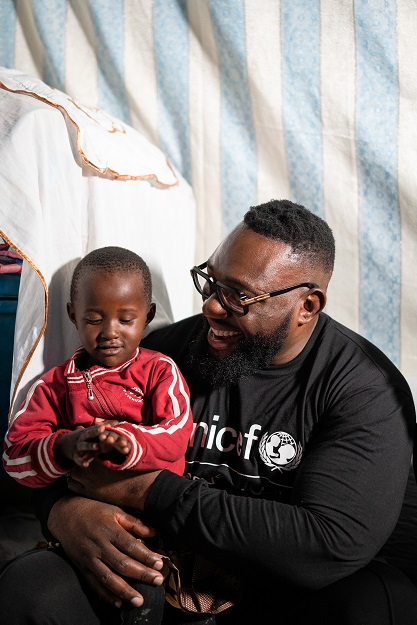 Zimbabwean-born, South African national rugby team legend Tendai Mtawarira, also known as ‘The Beast’, has been appointed by UNICEF as a Regional Ambassador for Eastern and Southern Africa. The announcement follows Mtawarira’s travels with UNICEF to Mukuru, an informal settlement in Kenya’s capital city of Nairobi, where he spoke with young girls and boys about challenges with learning in the COVID-19 era, accessing clean drinking water and the significant hurdles families continue to face.

As a UNICEF Regional Ambassador, Mtawarira will use his voice to bring much-needed attention to UNICEF’s humanitarian and development priorities in the Eastern and Southern Africa region. Mtawarira is particularly passionate about improving educational opportunities for the most vulnerable children. Even before the pandemic, a vast majority of African children were experiencing a widespread learning crisis, with COVID-19 only serving to exacerbate the situation.

“I am so honoured to take on this new role,” said UNICEF Regional Ambassador Tendai Mtawarira. “I believe education is the great equalizer and every child on this continent should be able to access quality learning and fulfil their potential.”

Many parents living in informal settlements in Kenya are struggling with a lack of water and proper sanitation, and providing for their children’s basic needs. This has been exacerbated by the loss of work due to COVID-19. UNICEF is helping to provide families with access to clean drinking water via community water points and in schools, as well as training community health workers in hygiene, water safety and menstrual hygiene management. Girls are also being supported with reusable sanitary pads so that they can attend school consistently and not miss days due to menstrual hygiene issues.

“It has been very humbling to meet with children in Mukuru and hear how going to school is not only important for their education but also for providing a vital place of safety when there are so many dangers and distractions outside the school gates. Their drive to keep studying despite such difficult living conditions is really inspirational.”

Mtawarira also met with UNICEF’s Regional Director for Eastern and Southern Africa to discuss his new, important position in advocating for some of the region’s most vulnerable children.

“We’re deeply honoured to have ‘The Beast’ as a UNICEF Regional Ambassador and such a powerful voice for children,” said Mohamed M. Fall following a meeting in Kenya. “His strong commitment to education and wider children’s rights make him the ideal candidate to take on the UNICEF Ambassador role and we look forward to working closely with him in the coming years.”

Mtawarira, who has his own The Beast Foundation to support children and youth through sport and education, collaborated with UNICEF in 2020 to produce a video titled ‘Africa Strong’ to mark the Day of the African Child. He was a key voice in UNICEF’s ‘Call from Africa’ campaign at the end of last year to increase COVID-19 dose donations in African countries and fronted a video message calling for schools in the region to remain safe and open during the COVID-19 pandemic. Most recently, UNICEF released a World Immunization Week message from Mtawarira calling on parents to vaccinate their children against killer diseases.

As a UNICEF Regional Ambassador, Mtawarira joins a strong list of high-profile advocates who champion children’s rights on behalf of the world’s leading children’s organisation including UNICEF Goodwill Ambassadors David Beckham, Priyanka Chopra, Angelique Kidjo and Shakira, among others.

UNICEF promotes the rights and wellbeing of every child, in everything we do. Together with our partners, we work in 190 countries and territories to translate that commitment into practical action, focusing special effort on reaching the most vulnerable and excluded children, to the benefit of all children, everywhere. For more information about UNICEF and its work for children, visit www.unicef.org. Follow UNICEF in Africa on Twitter and Facebook.