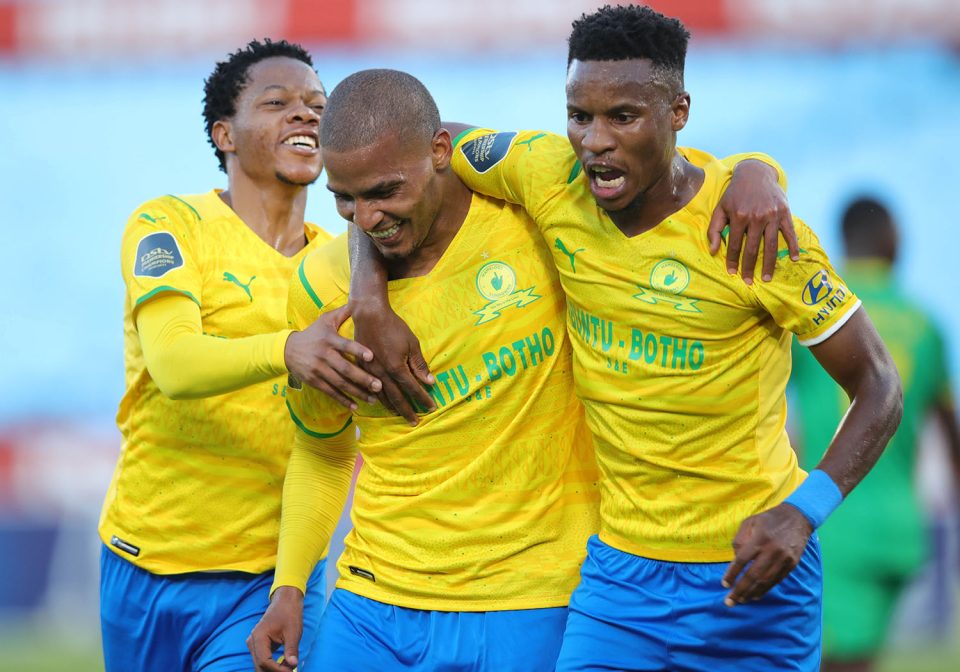 Mamelodi Sundowns clinched a fifth successive DStv Premiership title after they played to a 0-0 draw with Cape Town City at the Loftus Versfeld Stadium on Wednesday evening.

The result left the Brazilians 13 points clear of nearest chasers Royal AM with only 12 points left to play for, thereby sealing a 12th Premier Soccer League championship for the Tshwane outfit (and a 15th overall, including three championships in the National Soccer League era).

As for the Citizens, they reclaimed third place from Orlando Pirates and will hope to oust Royal for the runners-up spot in what remains of the 2021-22 season.

Sundowns clicked into attacking mode from early on and threatened a goal as early as the fifth minute, with Neo Maema driving a powerful shot on target and forcing a sharp save from City goalkeeper Hugo Marques.

On 12 minutes the hosts had another chance when Aubrey Modiba whipped in a free kick from the right flank to pick out the run of Rushine De Reuck, but the defender – under pressure from Marques and Taariq Fielies – could not keep his header down.

The Cape visitors offered a sporadic threat of their own, though their best chance saw Darwin Gonzalez fire an effort well wide of the mark midway through the first half.

The Brazilians, after a lull in intensity, dialled up the attacking pressure late in the first half and were nearly rewarded with a goal on 44 minutes when former Citizens winger Bradley Ralani found space in the penalty area and guided a shot on goal, but Fielies made an excellent block to ensure the teams were 0-0 at the interval.

The first chance after the restart went the way of the Citizens in the 52nd minute, as Mduduzi Mdantsane picked up a pass from Khanyiso Mayo, completed a great turn to make space for a shot, but blazed his right-footed effort off target.

‘Downs took their time to rediscover an attacking rhythm, but they nearly scored a goal out of nowhere on the hour mark when Aubrey Modiba cut inside from the right flank and unleashed a powerful drive which required a fingertip save from Marques.

The hosts were not prepared to merely settle for a draw and made an attacking triple substitution with just over 10 minutes of regulation time to play, bringing on Sphelele Mkhulise, Thabiso Kutumela and Lesedi Kapinga – with Gaston Sirino having also been brought on earlier.

However, Sundowns were unable to create any clear chances against a resilient City defence, which had been boosted by the earlier introduction of Keanu Cupido, leaving the match to close out with no score.

Sundowns will next be in action in the semifinals of the Nedbank Cup, playing Royal AM at Chatsworth Stadium on the evening of Saturday 30 April, while City will have a catch-up DStv Premiership clash away to Kaizer Chiefs earlier the same day.

Sirino Goal of the month